This year, in celebration of Global Handwashing Day, Pure Water for the World’s Haiti team conducted an awareness event about the importance of handwashing. The event was held at a school in the community of La Colline Deslandes, located in the region of Darbone in Leogane. This year’s theme was “Clean hands are a recipe for good health.” 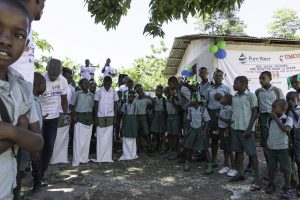 The PWW team gathered at Lecole Mixte Bon Berger LaColline Deslandes (school), with students also joining from the neighboring school of Lecole Mixte Sedrel. The community event lasted for more than three hours, during which time well over 125 students participated in a variety of activities, songs, games, and demonstrations, including:

Prizes were handed out for various activities consisting of school supplies: pens, pencils, erasers, pencil sharpeners, ruler, crayons, and notebooks. With the school year having just started, these supplies will help the students be well equipped for learning.

PWW’s Chief Project Coordinator/Deputy Country Director, David Trofort, conducted an inauguration ribbon cutting ceremony for the school’s latrine and handwashing stations, which PWW recently completed building, thanks to funding by UMCOR. Everyone gathered for the ceremony, after which the students and staff took a tour of the facilities.

After the kits were distributed, the students were given painted characters (see photo), in the form of soap, hands, and water droplets. Some students were able to get all three linked together, holding hands like the official logo of “Global Handwashing Day.” These characters were made with the generous donation of a 3D printer from Barbara Stewart, a great friend to PWW.

While some students were receiving their characters, others were painting a banner in celebration of the day. After painting activities were complete, students lined up and washed their hands in the new handwashing stations!