Dear Friends of Pure Water for the World and Haiti,

We know you care about the people of Haiti. The past two weeks have been very difficult, with many Haitians expressing anger, frustration, desperation, and fear.

If you would like to stay informed about what PWW is doing to support the Haitian people during this turbulent time, we invite you to read this updated summary:

You may recall the fuel riot that took place in Haiti last summer. It began in response to the government announcing a reduction in fuel subsidies that would result in a significant increase in the price of fuel (gasoline, diesel and kerosene). The announcement quickly led to widespread protests and civil unrest. Days later, in response to the demonstrations, the government rescinded the planned increase “until further notice.” While that response addressed the issue that sparked the protests, civil unrest has continued, intermittently, over the past seven months.

On February 7, the second anniversary of President Jovenel Moise’s election, violent protests began again with demonstrators demanding Moise’s resignation. Moise made promises to fight corruption and bring food, water and opportunity to every Haitian. His famous quote was “food on every plate and money in every pocket.” The people of Haiti elected him, putting their trust in his word, but his promises have yet to be fulfilled. And now, there are many questions about what happened to some $3.8 billion earmarked to help the poor.

As observers, we may wonder why the protestors are so destructive. What good will this do? We must remember that the situation in Haiti is very complicated. The struggle for basic survival is fundamental to so many Haitians. About 60% of the ≈11 million people who live in Haiti survive on less than $2 a day. They suffer from severe lack of access to their most basic needs…clean water, sufficient food, basic sanitation. They want change.

“We are living in misery and hunger,” shares Harold Lazard, a 43-year-old chemistry professor. The population wants the president to go “so there can be change, there can be another system, one where we have hospitals that function, health care, education, security. With this system we have here, the poor are dying of hunger with only dirt to eat. It’s not the opposition who closed the country but the population. It’s the population that has decided it no longer wants to live in hunger, in misery.” (source)

We remain devoted to our mission in Haiti. The PWW Haiti team is continuing to work, making daily decisions, keeping the safety of the team as the top priority. The team is assessing where and how it can make the greatest impact. This includes conducting assessments at schools, orphanages, and health clinics in the Port-au-Prince area, where PWW has recently and/or previously worked, to gain an understanding of their current needs for water provision and water treatment. Due to the recent unrest, which has included road blockages, some establishments are simply running out of water. The PWW team is working with them to determine the best short-term and long-term solutions.

Our three non-Haitian team members (who usually work in our Haiti office) spent last week at our Vermont office. There was great energy and focus as plans were made to address the current situation as well as looking toward the future. The team is returning to Haiti today. 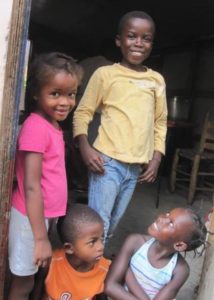 We have witnessed the profound, life-changing impact that this work has on communities. Children no longer suffer and die from waterborne illnesses. They can attend school and achieve an education. Parents are able to work and proudly provide for their families. We will continue to persevere because we know safe water transforms communities and provides the foundation for improved health, renewed hope, and a brighter future.

One of our passionate Haiti volunteers captured it perfectly when she said, “No matter how poor, absolutely no one should die from water…No matter the obstacle we keep on keeping on.”

We couldn’t agree more, and we are grateful for your continued support. Together, we will carry forward with our mission to improve the lives of the beautiful children and families we are honored to serve.

Please don’t hesitate to contact us, should you have any questions.

Want to help children and families in Haiti? Just $25 brings life-changing clean water to a child; $300 provides a comprehensive safe water and hygiene program to an entire family.
You can help improve their future by making a donation.