After 50 Years, High School Classmates Team Up at RAGBRAI to Ride for Safe Water 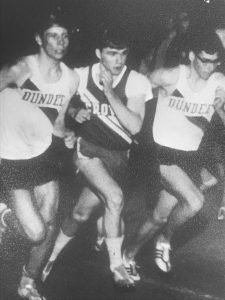 Jim Bodenner and Bruce Coleman are reuniting this summer at the 47th edition of the Register’s Annual Great Bicycle Ride Across Iowa. Famously referred to as RAGBRAI, this event is the longest, largest and oldest recreational bicycling touring event in the world. RABGRAI will take place from July 21 to 27, covering 427 miles.

Jim (pictured, on left) and Bruce (right) graduated from Dundee High School in Illinois in 1968. The two were great friends, avid runners, and close competitors throughout high school.

This summer, after 50 years, these long-time friends are coming together to reunite their passionate and competitive energies, but this time their goal is to raise awareness and much-needed funds to bring safe drinking water to children and families in desperate need. They are teaming up at RAGBRAI to Ride for Safe Water.

Following high school, Bruce moved to Waverly, Iowa, where he graduated from Wartburg College. He spent his career working for the Social Security Administration. He and his wife, Trudy, still live in Waverly, where they are now enjoying retirement.

While Bruce headed to Iowa, Jim remained in Illinois, where he attended college, graduate school, and law school. He married his best friend from high school, Sue Brian Bodenner. After successful careers, Jim and Sue recently retired and now live in The Villages, Florida.

Jim and Sue have always been passionate about the plight of developing countries, especially when it comes to the need for potable drinking water.

“It’s a story that is worth talking about,” Jim and Sue exclaim. “And, we’re on a mission to share it.” 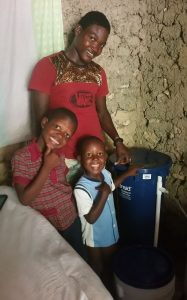 Twenty years ago, residents of the assisted-living community that Jim and Sue owned and operated in Rockford, Michigan contributed $400 to help fund a pilot program designed to test the effectiveness of a the Hydraid BioSand Water Filter in underserved areas of the Dominican Republic.

The pilot was so successful that it attracted international attention, resulting in Rotary Clubs, from across the United States, Germany and Canada, contributing more than $4 million (to-date) to support water and sanitation programs in developing countries. Over 50,000 Hydraid BioSand Water Filters have been installed in the Dominican Republic, Haiti, Honduras, Ghana and Kenya, with its growth continuing to expand.

Today, Jim serves on the Board of Directors of Pure Water for the World, Inc., a non-profit organization committed to improving lives by empowering people with access to life’s most basic necessities…safe water and sanitation. 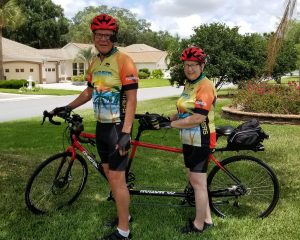 This summer, Jim and Sue (pictured) will share their passion by bringing their Airstream trailer from Florida to Iowa and joining Bruce for the famous RAGBRAI event. Together, the three will Ride for Safe Water.

While Jim and Bruce still debate about who was the best athlete back in the day, they both agree on the critical importance of safe drinking water for all.

RAGBRAI was established in 1973 by two friends who, like Bruce and Jim, shared a friendly, competitive relationship. The event began with an idea, a kind of a challenge, between Des Moines Register columnists, John Karras and Don Kaul. Both bike enthusiasts, Karras and Kaul famously fell into creating this cultural behemoth.

“We appreciate the challenge Karras and Kaul set for one another,” Jim said. “It is with that same spirit that Bruce and I are coming together. We are combining our athleticism and challenging one another, again. But this time, our challenge is to raise awareness and money to help families in need gain access to our most basic necessity, safe water.” >donate here<

Carolyn Crowley Meub, PWW’s Executive Director Emeritus, firmly believes they are up for the challenge. “When Jim has an idea, watch out. Biking across Iowa…no problem! I have yet to see Jim unable to accomplish what he has set out to do. On this adventure, Jim is bringing together his passion for biking and his long-term commitment to supporting safe drinking water for all. It is truly a win-win!”

PWW began in 1994 when a dentist from Brattleboro, Vermont traveled to El Salvador to provide medical services. Moved by the poor living conditions, he vowed to make a difference. After rallying colleagues in his Rotary Club, he returned with a mission to bring potable water to the villagers. The success of this movement outgrew the Rotary Club’s capacity, and, in 1999, Pure Water for the World, Inc., a 501(c)(3) organization, was born.

Today, PWW is based in Rutland, Vermont with offices in Tegucigalpa and Trojes, Honduras and Port-au-Prince, Haiti. The nonprofit organization celebrates its 20th birthday this year.