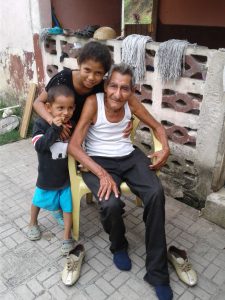 Hipolito Flores Cruz was born in San Antonio de Flores, a community in Trojes, Honduras. He has lived in the community of El Porvenir de Las Joyas for 50 years. The current life expectancy in Honduras for men is 69.6 years (source).
On May 25th Hipolito Flores Cruz celebrated his 100th birthday!

Hipolito and his wife, who has passed, raised five children. Three of their children are still alive. Hipolito lives with his daughter, Bertha Del Carmen Flores Pastrana.

Bertha is a PWW volunteer Community Agent in El Porvenir de Las Joyas. The PWW team began working in this community in 2019. Thirty-six families received hygiene training and bio-sand filters. Bertha is responsible for supervising four of these households.

Bertha and her father also have a filter. Six people live in their home, including Hipolito, Bertha, two of Hipolito’s grandchildren, and two great grandchildren. The filter has benefited the entire family, providing safe water. It also gives Bertha more time to care for her father and the family.

Empowered with the knowledge of safe hygiene practices, along with the clean water filter, Hipolito’s grandchildren and great grandchildren will be protected from dangerous waterborne illnesses, opening new doors to their future!

This Father’s Day, honor the father in your life by making a donation in his honor.
Click here to change lives.