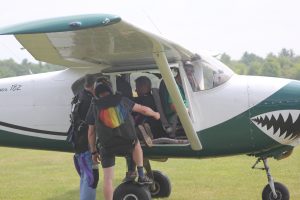 Jump for Safe Water is the inspiration of Carolyn Meub, PWW’s recently retired Executive Director. Carolyn wanted to launch into retirement with a fun, collaborative, engaging event that would celebrate her adventure with PWW and raise funds to bring life-changing safe water programs to children and families in Haiti and Honduras.

With much anticipation, the morning of June 29th arrived, the day the Jump for Safe Water fundraising event was scheduled to take place. However, Mother Nature had other plans that day, and rain delayed the event. The silver lining was that it gave jumpers time to raise another $10,000+!

The morning of July 6th, the backup date, arrived and the weather was in alignment. Because of the change of date, some of the jumpers were able to do the 6th, others jumped on July 7th, and some were unfortunately unable to make either date due to scheduling conflicts. Regardless, all were there in spirit and were instrumental to making this event a tremendous success!

The six jumpers participating on the 6th arrived bright and early at Vermont Skydiving Adventures. Carolyn was among the second group of jumpers to enter a “perfectly good airplane” (as she referred to it) and ascend more 10,000 feet into the air. Once at their peak height, Carolyn and her tandem partner launched out into the beautiful Vermont summer sky. 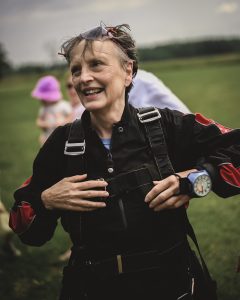 “It was truly a thrilling adventure of a lifetime. I would do it again! It was absolutely amazing to see the Lake Champlain Basin from a birds-eye view – the mountains to the east and across the lake; the rich farmland, the lakes and rivers. I saw Vermont from a perspective I never have before, and it was awe-inspiring!

I am deeply moved by the generous support PWW received, from more than 300 donors, for this crazy adventure! These donors carried us across the BIG audacious goal of $100,000!

I have been touched by so many lovely words of support and encouragement that donors wrote to all the jumpers. And I would like to personally offer my heartfelt thanks to my fellow jumpers, the incredible donors, Vermont Skydiving Adventures, Mount Mansfield Media, and the PWW team, Tracy, Jamin and Nathalie – together this bucket-list adventure was a whopping success. Without all of you, we certainly could not have soared so high!” – Carolyn Crowley Meub 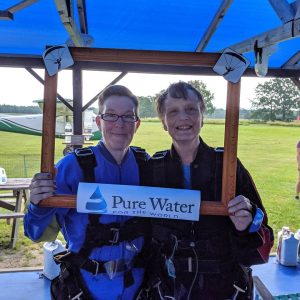 Also among the jumpers was PWW’s office manager, Tracy Adams, who jumped in to participate immediately after Carolyn told her about the idea for the event.

Tracy shares, “While it is an incredible experience to jump out of an airplane and feel the weightlessness of a bird in flight, what is truly amazing is that PWW took its first donation toward the $100,000 goal on April 3rd and by July 3rd, just three months later, it was realized! That is truly something to celebrate and be in awe over! Thank you to all those who donated for helping to save lives through safe water and sanitation education!”

More photos and videos can be viewed by going here: https://shwca.se/pww_jumpforsafewater

Carolyn’s launch into retirement raised $100,000! PWW would like to extend our heartfelt gratitude to all who supported the Jump for Safe Water. Your support meant a great deal to Carolyn AND it will dramatically improve the health and future of so many children and families who live in underserved communities across Honduras and Haiti.  Thank you for changing lives!