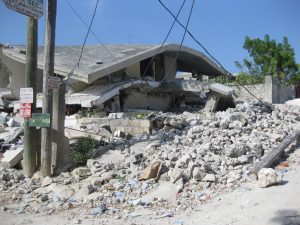 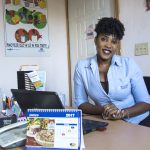 I still remember that day. It was 4:52pm when I started feeling vibrations that I confirmed after having a look into my cup of water on my desk…

…I have learned that, when death is knocking at our doors, we forget who we are, where we are, our nationality, and our social rank. It’s the moment where a second counts more than all those you’ve already lived. All that we’re thinking during that instant is to have a second chance, stay alive in order to repair all our errors, love harder, forgive, and make promises that really we intend to keep.
Life is so precious. We have to know that before it’s ending. 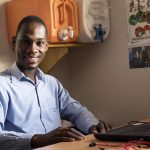 On January 12, 2010, I was 23 years old. I was never informed about what an earthquake is; I had never been told, in history, that Haiti had suffered an earthquake. So, for me, it did not exist…

…On the occasion of this 10th anniversary of this terrible earthquake I will say: “If I still live, it is by the grace of God.” 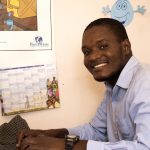 …While I was relaxing and watching television, I felt my father’s house shake…I jumped up and ran very quickly, calling my little brother who was on the roof, saying, “Gisson, where are you? We have to leave the house. An earthquake has hit Haiti and is raging.”…

…The insecurity disappeared during the earthquake and for some time following that day.
Theft, burglary, selfishness, indifference, greed, individualism…all these vices disappeared in the environment and in the heart of what was affected by the earthquake of January 12, 2010.

I never expected, when I heard about the earthquake in Haiti, that it was going to be a major life-changing event for me and for Pure Water for the World. PWW was just a small beginning NGO in Haiti, working in some schools, when the earthquake struck. What we did not yet appreciate were the very special and incredible people that had been drawn to work with us because of our mission…

…Our people, the PWW team, rose. They helped carry people to the hospitals and clinics. They helped set up clinics. They brought filters to clinics and field hospitals so that clean water could be used to dress wounds. They organized trucks and water delivery services to take care of the poor. They organized the delivery of water for about 250,000 people for several months. They set up swimming pools, to serve as reservoirs, out of which people could collect water because concrete storage tanks were ruined. They helped everyone they could…

While the last several months have challenged our team’s ability to effectively work in Haiti, we are hopeful that the situation in Port-au-Prince will remain relatively calm and allow them to get back out to communities and proceed with implementing life-saving clean water, hygiene and sanitation programs where they are most needed. And, while the Haitian people continue to be tested with adversity, their enduring spirits persevere, holding tight to the hope for a brighter future. Join us in honoring the people of Haiti.