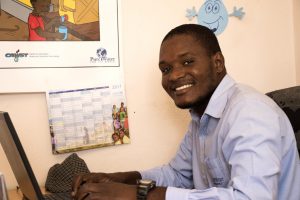 Around 3:30pm, on January 12, 2010, I got out of my university, in the city center, arrived at my house around 4pm, and sat down in front of the TV. While I was relaxing and watching television, I felt my father’s house shake. My reaction was to climb the stairs and warn the children, who I thought were on the roof, not to run on the roof because it is dangerous.

After a few minutes, the house began to move from left to right, from top to bottom. I told myself that this jolt cannot come from the children. So, I jumped up and ran very quickly, calling my little brother who was on the roof, saying, “Gisson, where are you? We have to leave the house. An earthquake has hit Haiti and is raging.”

My little brother and I had to play the superhero to sneak in the corridor that separated the house from the street. While there, other houses were collapsing during our fight to survive. My little brother and I were hit with a lot of debris and bricks on our bodies. Fortunately, we were not fatally injured.

For more than four weeks, following the earthquake, I noticed a spirit of humanism and sharing very high among people around me. That is to say, we ate in common; we slept together, even when the person was unknown to us. A fact that really remains in my memory was that the second day after the earthquake 200 ml of drinking water (just over 3/4 of one cup!) was shared by more than 5 people.

Harmony and unity in strength was our symbol for more than two months; it was as if we were reliving the Battle of Vertières of November 18, 1803 for freedom from the French army.

The insecurity disappeared during the earthquake and for some time following that day. Eight people, including myself, spent 8 nights sleeping in the open air…outside, without walls, and without protection. Nothing happened to us.

Theft, burglary, selfishness, indifference, greed, individualism…all these vices disappeared in the environment and in the heart of what was affected by the earthquake of January 12, 2010.