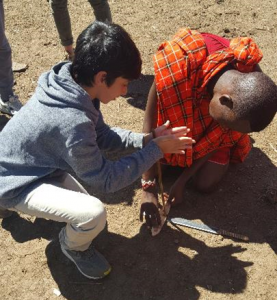 My name is Lorenzo Platt, I’m seventeen years old, I live in Florence in Italy, and I’ve been interested in water issues for a couple of years now.

My interest towards water issues began when my family and I went on a vacation to Kenya in 2017. While there, we went to visit an indigenous village in the Masai Mara. The village was formed of ten houses, the walls were made out of cow dung, the mattresses were made out of cow skin, and the inside of the houses was dark and hot. I remember that most of the men were really tall, and they explained that their diet was based on red meat. Their culture, their houses and their lifestyle were so different from what I was used to in Italy, I almost couldn’t believe my eyes. Since Kenya was the first undeveloped country I’d ever visited, I didn’t know what to expect, and for this reason I thought I was in a movie or on another planet. 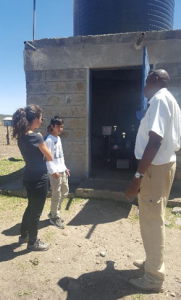 Later that day, our guide brought us to a well and showed us how it functioned, and after a few moments we saw a group of young Masai kids who were filling up some containers with water to bring back to their families. The kids were younger than me, they tied the heavy yellow plastic jugs to their backs like backpacks and started to walk home. I was genuinely shocked, because they were acting as if doing this hard work was normal for a kid. At that moment I realized that I wanted to be involved in a project about water to help the communities in need.

Since I’m just a teen who lives in Europe, I’ve always felt unable to help many communities that are affected by these matters mainly due to geographical reasons and to my young age.

The lack of knowledge regarding access to clean water is really common here, and for this reason many are not aware of how people are forced to live in undeveloped countries all over the world. A possible solution to this problem in Italy could be a subject in school dedicated to water education and a class where students can discuss and debate about different themes in order to raise awareness. 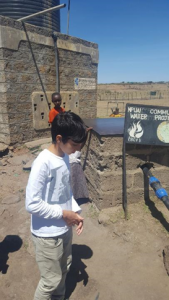 I feel that in modern countries people live in a bubble, in a utopian world, because many consider this element as something that is guaranteed and as something that is always in reach and that is endless. In order to get water we just have to open the tap and cold or hot water just comes flowing down until you decide you had enough. While this is normal for us, in African countries, like Kenya, the majority of the population doesn’t have access to water and, therefore, long walks to get to a water source, which can be contaminated, are necessary. The heavy buckets filled with water cause several physical problems and the diseases obtained from contaminated water are numerous.

The gap between the lifestyles of these two worlds is too big, and, since I first talked about this with my father, I’ve felt a sense of injustice and I’ve been immediately interested in water issues. What’s going on in the world every day makes me want to act, be more informed on this theme and also more careful on how I use water so that I don’t waste as much.

Last summer I was supposed to go to Honduras to work on a water project with Pure Water for the World, but the trip got cancelled due to Covid-19. Initially I felt pretty frustrated, but I knew I couldn’t do anything about it, so, for the past six months I’ve been waiting patiently, and I hope I’m going to be able to go next summer.

Lately, I’ve been reading some books about water in order to learn more and more. I recommend “Water 4.0” by David Sedlak and a book I’m currently reading which is called “Let There Be Water” by Seth M. Siegel. It discusses how Israel, a country in the middle of a dessert, used technology to become a water exporter.

Lorenzo, we, too, have felt the disappointment of not being able to run our volunteer trips. We hope to resume them next summer, and we sure hope you can join us! Thank you for sharing your passion for clean water for all!