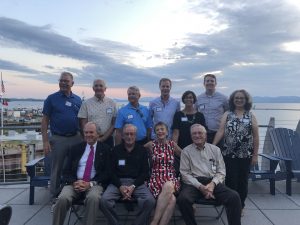 Rutland, VT – August 10, 2019. The Board of Directors of Pure Water for the World, Inc. (PWW) joined PWW founders, staff members, volunteers, donors, supporters, and partners for a festive event, at the ECHO Leahy Center for Lake Champlain in Burlington, to celebrate the organization’s 20th year of bringing life-changing safe water and sanitation solutions to children and families living in underserved communities across Central America and Haiti. Senator Patrick Leahy and his wife, Marcelle, long-time friends of PWW, also joined in the celebration.

Bob Mohr, PWW Board President, started the evening by welcoming guests and thanking all of the supporters who have helped the organization reach this milestone. “Without you, there is no 20 years of changing lives. This is a celebration of you and Pure Water for the World.”

Bob went on to acknowledge the founders of the organization, Rotarians from Brattleboro, VT, who are fondly referred to as the ‘Water Rats.’ Present at the event was founder, Peter Abel, along with his wife Marion, and PWW’s initial financial benefactor, Ken Grabeau, along with his wife, Ruth.

Bob talked about the extensive growth of the organization over the past 20 years, the tremendous evolution from simply providing access to clean water to empowering communities with comprehensive WASH (water, sanitation and hygiene) solutions. He acknowledged that PWW has been recognized both domestically and internationally as a leader in the WASH sector.

“But the mission remains the same,” Bob explained, “improving the health and livelihood of children and families living in underserved communities.”

To introduce the evening’s honoree, Bob shared, “The growth and transformation the organization has experienced is in large part due to our Executive Director for the past 17 years, Carolyn Crowley Meub. Without Carolyn, three quarters of a million lives would not have been significantly impacted.”

Bob presented Carolyn, who announced her retirement earlier this year, with a proclamation from Vermont Governor Philip Scott, who was unable to attend the event. The proclamation was offered in recognition of PWW’s incredible successes over the past 20 years. Governor Scott also issued a certificate of congratulations to Carolyn, recognizing her 17 years of service as Executive Director of PWW.

Bob’s wife, Susan Stafford Mohr, then took the podium to introduce Senator Leahy, a long-time supporter of clean water programs and of PWW.

Senator Leahy offered his words of thanks to all who have supported PWW through the years, saying PWW is “one of the great success stories in the world.” The Senator welcomed PWW’s Country Directors, visiting from Haiti and Honduras, to Vermont and recognized PWW as an example of how to get a lot done when a little money is directed “in the right way.”

The Senator offered powerful words to supporters. “You’ll never know the people you save. They’ll never know who you are,” he said. “All they know is their lives are better, and their lives have been saved because of what you’ve done.”

The Senator recalled his trip to Haiti after the devastating 2010 earthquake, when he was able to see, firsthand, the work PWW is doing.

“We take clean water and sanitation for granted,” he stated. “We saw children and parents who had suffered a terrible, terrible earthquake. But they had water. And as long as they had water, they had hope.”

Following Senator Leahy, PWW Deputy Director, Jamin Gelder, honored Carolyn and her years of service by recognizing two things, in addition to water, that Carolyn is passionate about; mentorship and the empowerment of women and girls.

The Carolyn Crowley Meub Women Empowerment Scholarship was created in Carolyn’s honor. It is a scholarship that will be awarded annually to students looking to make a difference in the lives of girls and women in developing countries.

Carolyn stood before the group deeply touched and expressing her heartfelt gratitude, saying, “I stand here today on your shoulders.” She extended her appreciation to all who have made the work of PWW possible. She shared lessons learned from this experience, from PWW supporters and from the people of Haiti and Honduras, which have all left a lasting imprint on her life.

Jamin invited Carolyn to grant the first scholarship to PWW intern, Olivia Laramie, a graduate student who has spent the past four years interning for the organization. She traveled to Honduras this summer to work on a project that helped measure the impact PWW’s menstrual hygiene program is creating in communities.

PWW Country Director from Honduras, Maria Inestroza, spoke to the group, sharing stories “From the Back of a Pickup Truck”, a place PWW volunteers know very well. Maria explained that from this unique perspective one has a broader view of the surroundings; linking PWW’s visionary perspective and commitment to do the hard work that changes lives. Maria shared several impactful stories about families whose lives had been transformed by clean water. She ended by inviting attendees to join her ‘in the back of the truck.”

Doug Rupert, PWW supporter and Rotarian from Milford, VT, came forward to present the organization with a check from a recent golf tournament fundraiser. Doug thanked PWW for giving him and other Rotarians “a chance to make a difference in the world.” 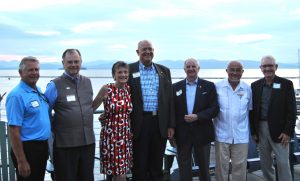 The evening came to a close with PWW founder, Peter Abel, offering the final words. Peter acknowledged the passion and commitment of the initial ‘water rats’, including Dart Everett, Jesse Corum, Phil Huber and Tristam Johnston. He finished by saying, “Who would’ve thought that from a simple international service project, all of this would come.”

Join us in celebration of an impactful, unforgettable 20 years!  Looking forward to the next 20! 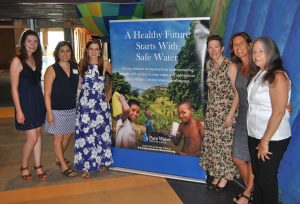