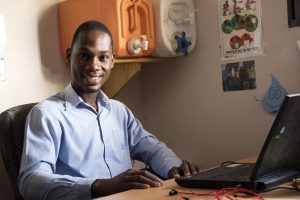 I am pleased to share with you a short story of this date which will always remain in the memory of all Haitians.

On January 12, 2010, I was 23 years old. I was never informed about what an earthquake is; I had never been told, in history, that Haiti had suffered an earthquake. So, for me, it did not exist.

I had been working at Pure Water for the World, as a bio-sand filter technician, for 1 year and 3 days. PWW was flexible and had given me the ability to work and continue with my university studies 2 days a week. I would leave work every Tuesday and Thursday at 2pm so that I could go to the university where I was learning Electronic Engineering.

This university was housed in a 3-floor building. My classroom was on the top floor. Can you imagine a university that has 3 floors in Haiti where construction does not meet any standard and what can happen if there is an earthquake????????????

This day, Tuesday January 12, 2010, around 1:00pm I had not been interested in leaving work to go to my classes. I was feeling a little lazy on this day. Finally, I ended up staying at work.

At 4:00pm, the workday ends, and I got home at about 4:30pm. I took my notebook and went to see a friend from the neighborhood who was also in classes at the university. We met up right away, along with 2 other friends, and were chatting about our studies.

Suddenly, we heard a noise coming out of nowhere like thunder. We asked each other, what is it? A few seconds later, the ground began trembling under our feet. At that moment, we cry aloud “Jesus, Jesus, Jesus” holding hands with one another. We were frightened. We were restless. We thought it was the end of the world.

In less than 1 minute, the country was devastated. Beside us, several houses were already collapsing. Cries came from here and there. But, God had protected us. My friends and I were safe physically, but this inexplicable moment devastated us psychologically. We will never forget it.

The following day, I decided to go visit the university building to see if I was inside, would I have had the chance to survive? When we arrived, the situation was serious, tragic and alarming. About 90% of the students who entered inside on this day were buried under the rubble, and the other 10% were existing between life and death.

This 10th anniversary reminds me of my sister, who was also buried under the rubble. It has already been 10 years since this earthquake, nicknamed “Goudou Goudou”, kidnapped my sister for beyond.

On the occasion of this 10th anniversary of this terrible earthquake I will say: “If I still live, it is by the grace of God.”